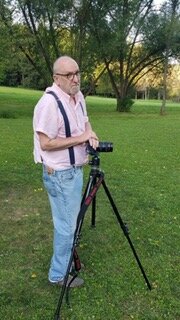 Please share a memory of Julian to include in a keepsake book for family and friends.
View Tribute Book

Julian was a wonderful husband and partner-in-life, a loving brother to his three sisters, a good godfather, a good uncle, and a great friend to those who were fortunate to call him that.

A recent quote-of-the-day which Julian noted and saved was as follows: “I want people to talk to one another no matter what their differences of opinion might be.” Studs Terkel  This was one of many gifts Julian gave to his family and friends and to the world; the gift of engaging everyone, including casual encounters with strangers in his day-to-day life.

As a professional photographer, Julian captured images of people ranging from everyday folks to shop owners in Washington Heights to famous actors, actresses, and models to a President in the White House.

His long-time friend, Ron, said “I never had a bad day with Julian nor a bad five minutes.” His sister-in-law, Jane, said of Julian “Hard to remember when he wasn’t part of the (Wagner) family.” From his wife Mary (Maggie) “The world - my world - looks so different without you.  Streets in our neighborhood/we have walked countless times seem distorted now.  Even the familiar faces on TV don’t look the same without you by my side.”

In lieu of flowers, donations may be made in Julian’s honor to:

Share Your Memory of
Julian
Upload Your Memory View All Memories
Be the first to upload a memory!
Share A Memory