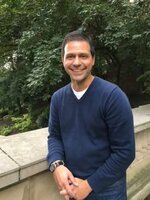 We are deeply saddened to share the news of the passing of our beloved Christos George Kalyvas on December 10th, 2021 after a hard-fought battle with cancer.  Born on November 26, 1966 and raised in Yonkers, New York, he graduated from NYU with both a BS and an MBA.  He went on to a long career as a partner at Ernst & Young based in New York City. His sharp mind coupled with his unwaveringly positive attitude made him a widely admired leader among both colleagues and clients.  He also enjoyed serving his community through his role on the Board of Directors of The Picture House, a regional film center.

For all of his professional accomplishments, Chris’ most important roles were those of husband and dad. Chris is survived by his wife Erika (also known as his “lovely bride,” as Chris often referred to her), and his children Andrew (21) and Emily (18), who are both students at Georgetown University. He also leaves behind his devoted companion and dog, Woolson.

Chris looked forward to spending summers with his family in Cape Cod, where he enjoyed cycling the Cape Cod Rail Trail, kayaking among the seals and lounging on the beach.  A Mets season ticket holder, he often rooted for the underdog.  He enjoyed travelling with his family to many cities across the globe.  Much to his family’s amusement, he was known to belt out many a Broadway showtune favorite in the car and at one time was a co-star of Hugh Jackman’s.

He is also survived by his parents Bessie and George, his brothers, Nicholas and John, his mother- and father-in-law Elenore Boehm and Robert Kulpa, his sisters-in-law Olga Kalyvas, Paula Kalyvas, and Karen Holzem and his brother-in-law John Holzem.   He will also be remembered by his godson Sebastian, his nephews and nieces Zachary, Michael, George, Rachel and Becci, and his aunts, uncles, cousins, friends and colleagues.

Visitation will be held on Tuesday December 14th from 2-5pm and 7-9pm at Sinatra Community Home for Funerals, 601 Yonkers Avenue, Yonkers, NY  10704.

In lieu of flowers, donations can be made in his name to the following charitable organizations: