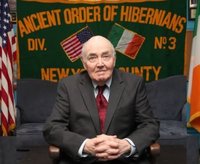 James P Winkle on June 15, 2021. Long time Inwood resident. Proud member of the Knights of Columbus St Joseph's Council 443, the Ancient Order of the Hibernians Division 3 New York County, and the Good Shepherd Men's Club.  James worked as a long shoreman on the docks of New York during his younger days. He then went on to work for New York City's Department of Sanitation and after his retirement, he became a doorman.

Adored husband and best friend of Kerry (nee Kelly). Loving father of Jimmy, Nancy (Steve) Lane, Brendan, and Kerry (Matt) Kusic. Doting grandfather of Steven, Jenna, Katie, Patrick, and Jack. Beloved uncle of Walter Hoffman. He will be greatly missed by all those who knew him and loved him. He always had a smile on his face and loved his family more than life itself.